When we got to Aulani for the second half of our vacation, it wasn’t check-in time yet, so we walked around the hotel and (of course) we had to check out Aunty’s Beach house (the kids club).  The kids immediately loved it, and didn’t want to leave, so we did what any parent would do, left them there, picked up a cocktail and walked around the rest of the hotel (minus the kids).  SCORE!!! 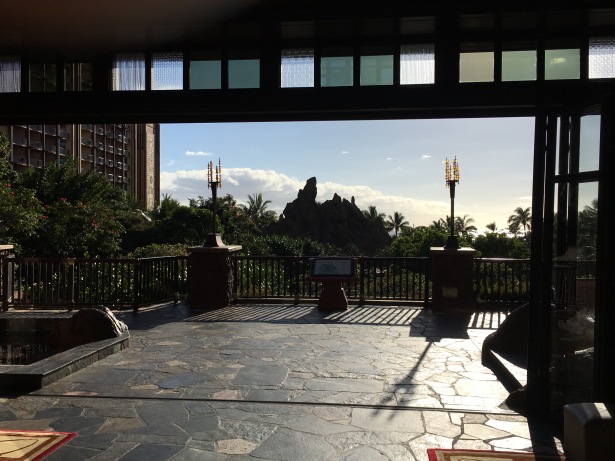 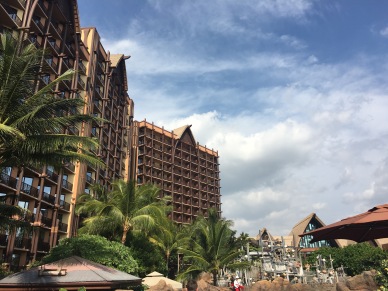 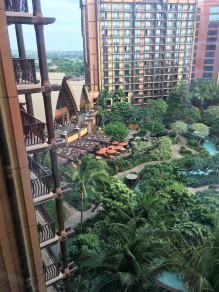 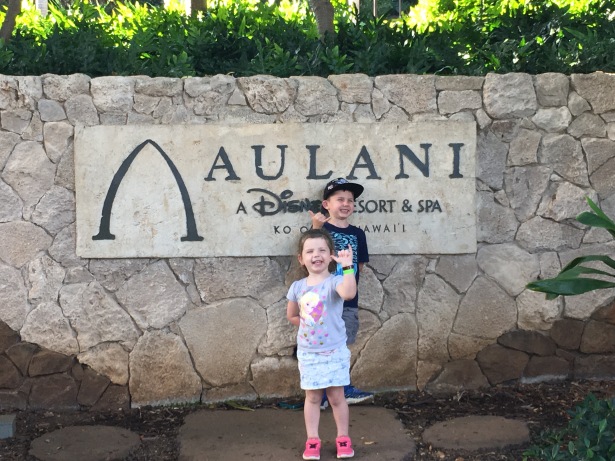 After we received the text that our room was ready, we called up our bags and went to check out the room.  We had a deluxe room with an ocean view, which worked well for our family of four.  It included a microwave, refrigerator, and coffee pot. After relaxing for a few, we went down to pick up the kids, and walk around with them, before stopping at the Olelo room Bar & Lounge for appetizers (what we called dinner) and live music.  The pool was open for another hour, so we figured let’s get a quick night swim in, so we went back to the room, quickly changed, and went down for a little swim.  The pools were pretty empty and it was fun to have some spontaneity even with the kids.  We were all exhausted after our swim and went to bed, our first night in our room at Aulani. 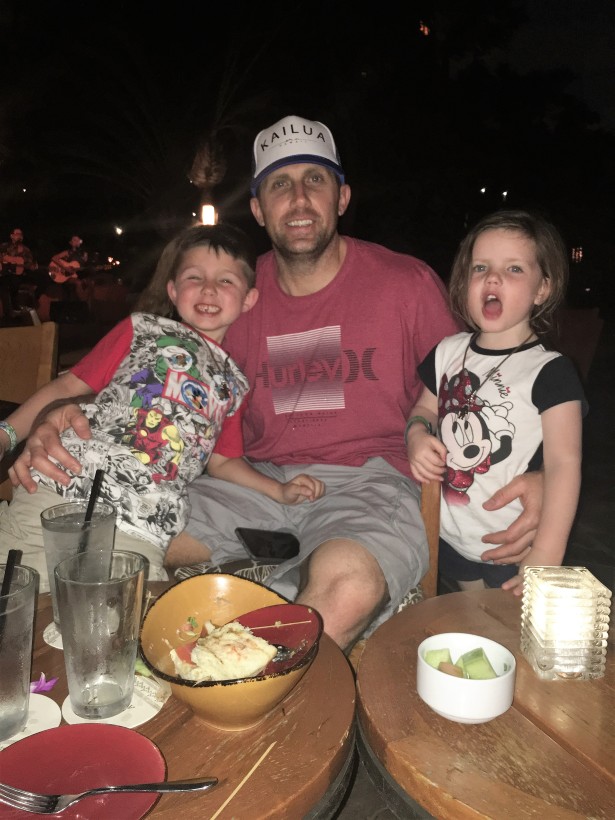 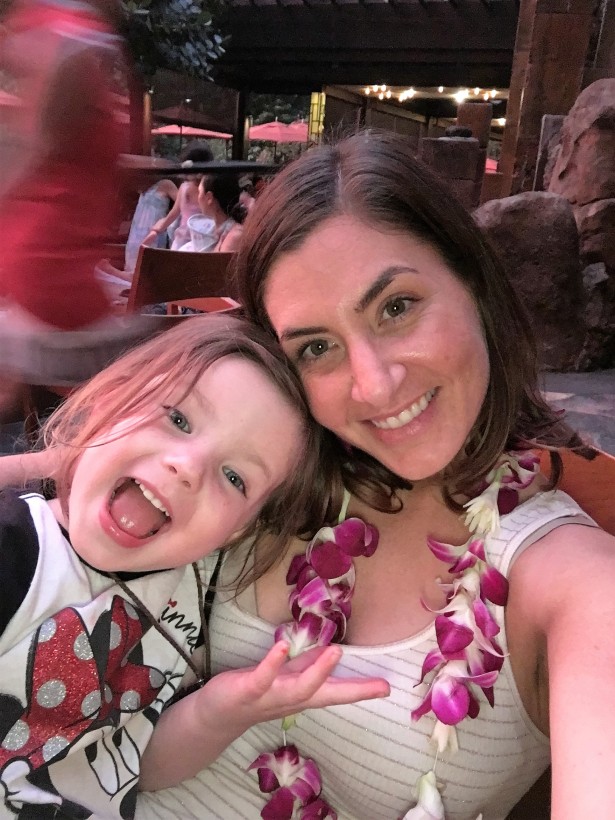 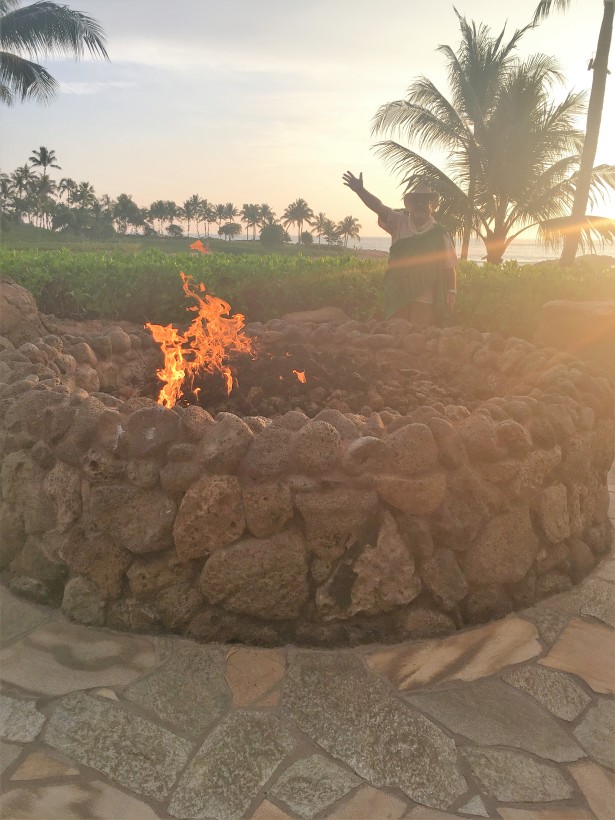 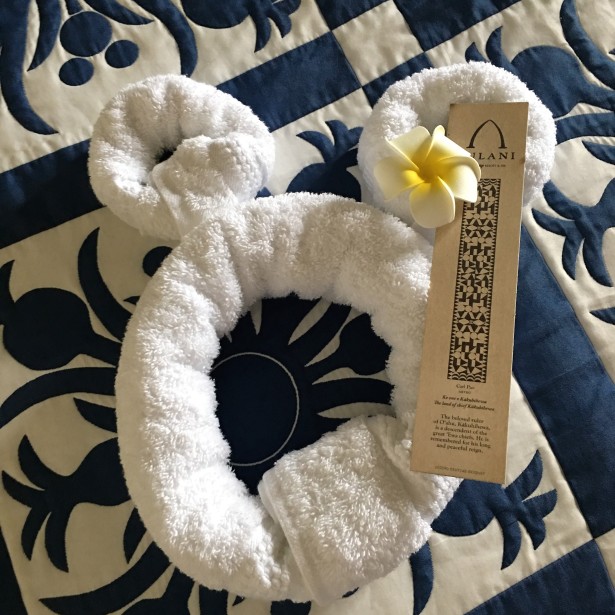 The next day we woke up, ate breakfast at the buffet with the characters, because you have to do that activity at least once while at any Disney resort.  The characters came out to dance and meet with each of the tables.  Breakfast was a buffet assortment and included beverages.  After breakfast, we dropped the kids off at the kids club and went to work out in the gym.  It’s been years since I’ve worked out in a gym (outside of our garage), so it was a nice change.  Since the kids were in the kids club, we go everything ready (minus screaming and crying) for a day at the beach. 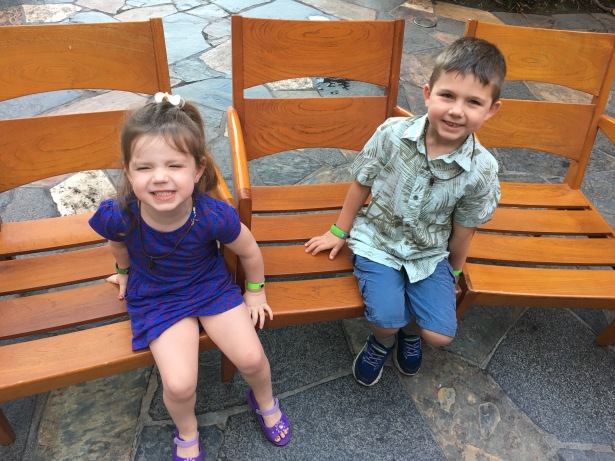 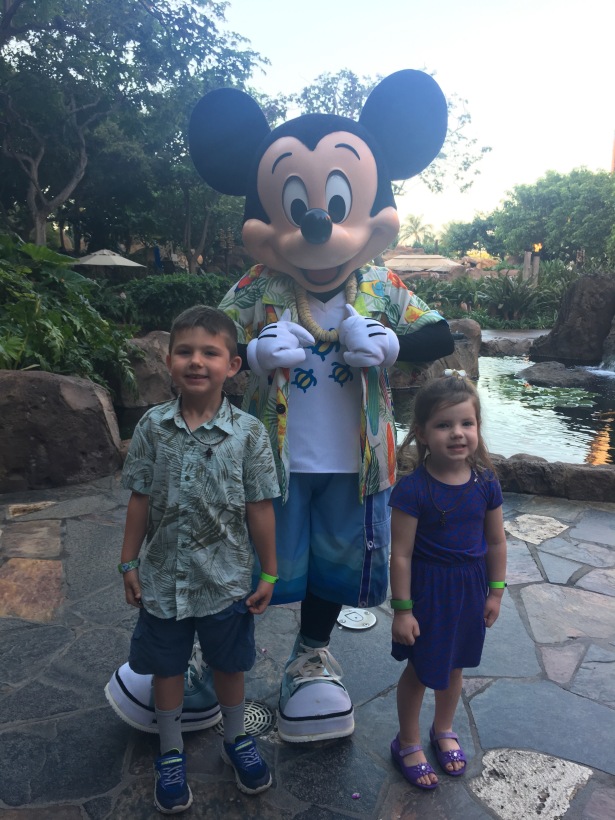 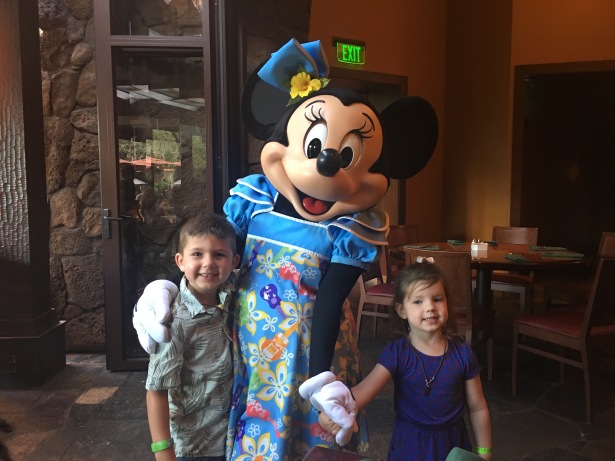 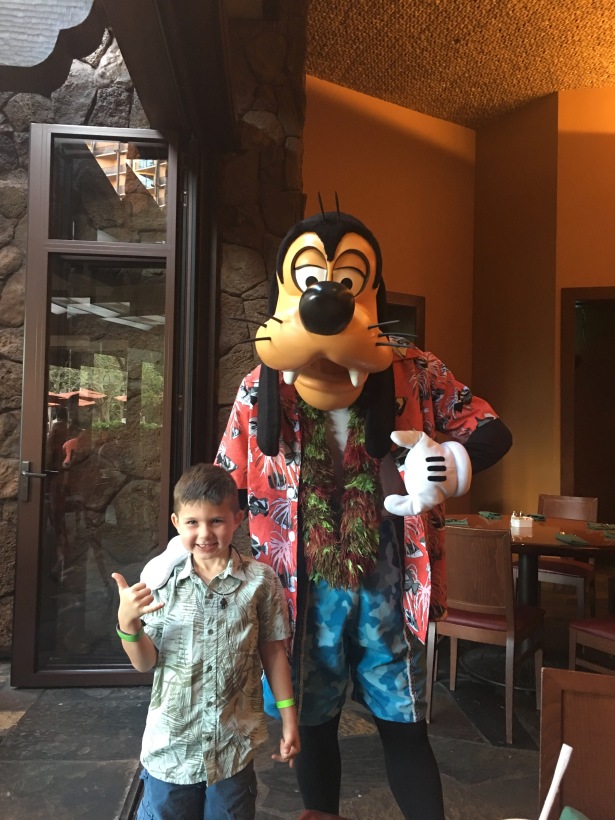 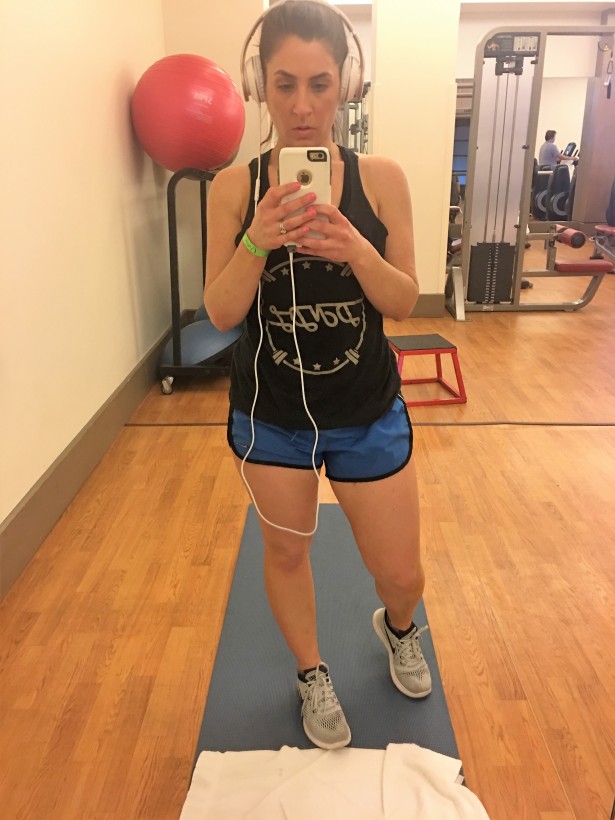 We picked up the kids around lunchtime and headed to the beach in front of Aulani, Maggie met us there and we stayed at the beach all day.  At the beach we played in the sand and ocean, rented boogie boards, and did standup paddle boarding around the lagoon. 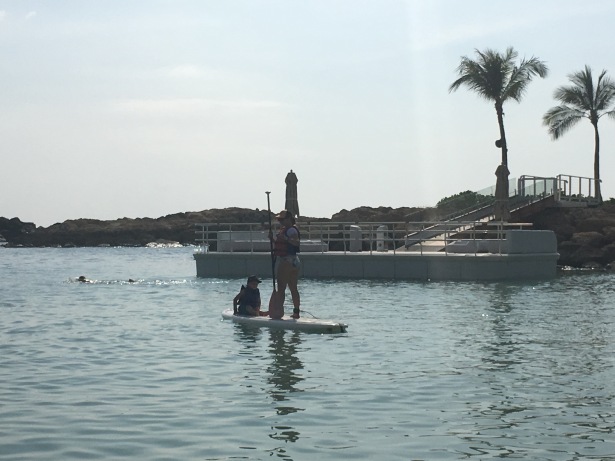 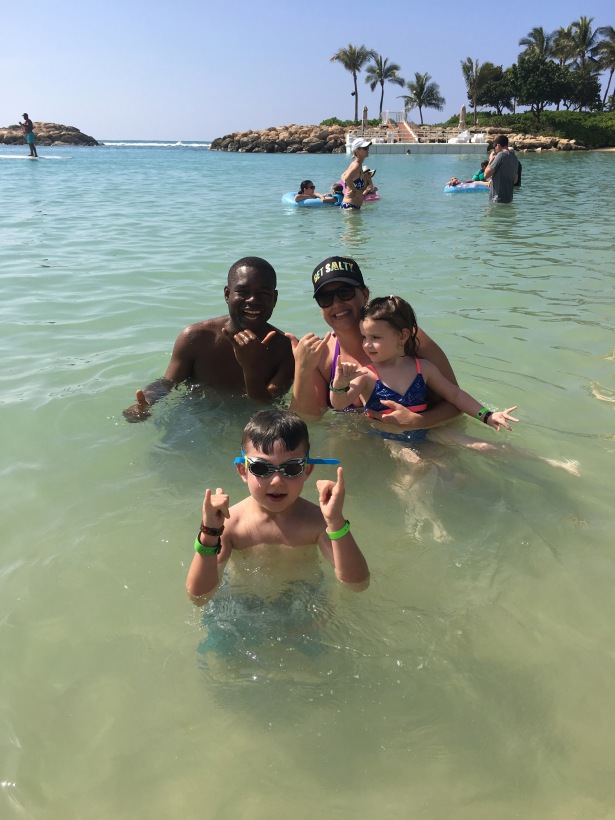 That night we fed the kids early and dropped them off at the kids club and headed across the street to MonkeyPod for a quiet dinner.  There is a great shopping center across the street from the hotel with an assortment of restaurants that makes for a variety of options (besides just the hotel, and a lot cheaper). 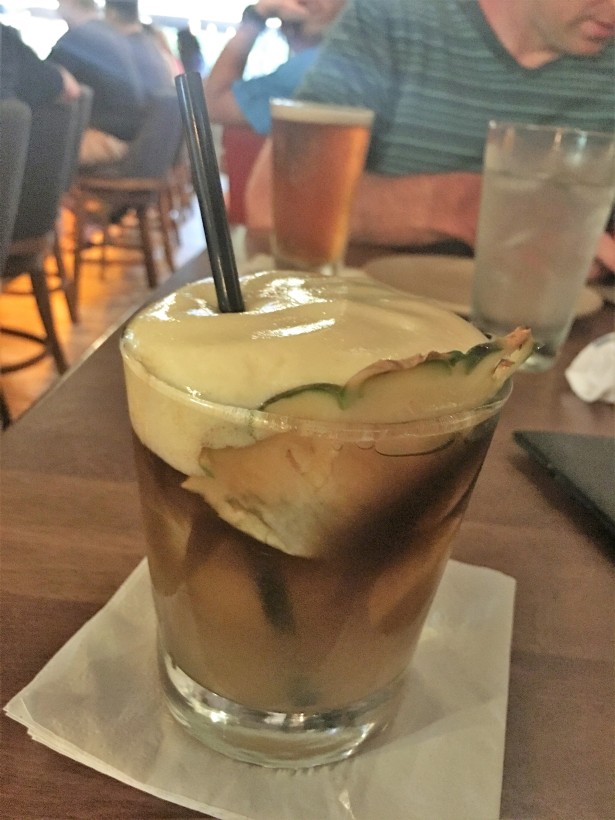 The next morning, we woke up and walked to the shopping center across the way and had breakfast burritos from the ABC store and coffee from the coffee shop, then came back to drop the kids off at Aunty’s Beach House, while we worked out in the gym.

We planned to have a pool day.  The pool amenities at Aulani are really nice, including a lazy river, two water slides, kid’s area with bridges and slides, and multiple pools that were all a comfortable temperature.  We found the ABC store across the way to have a large assortment of food options (at a far cheaper price than Aulani), so we picked up lunch there that morning, so when we got hungry we just ran upstairs to the room and brought it down to eat at the pool chairs. 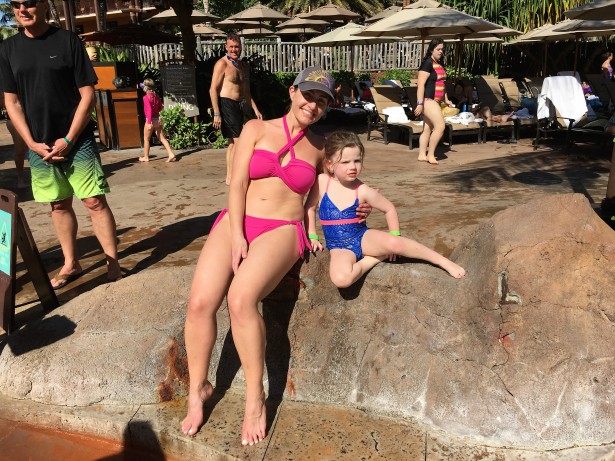 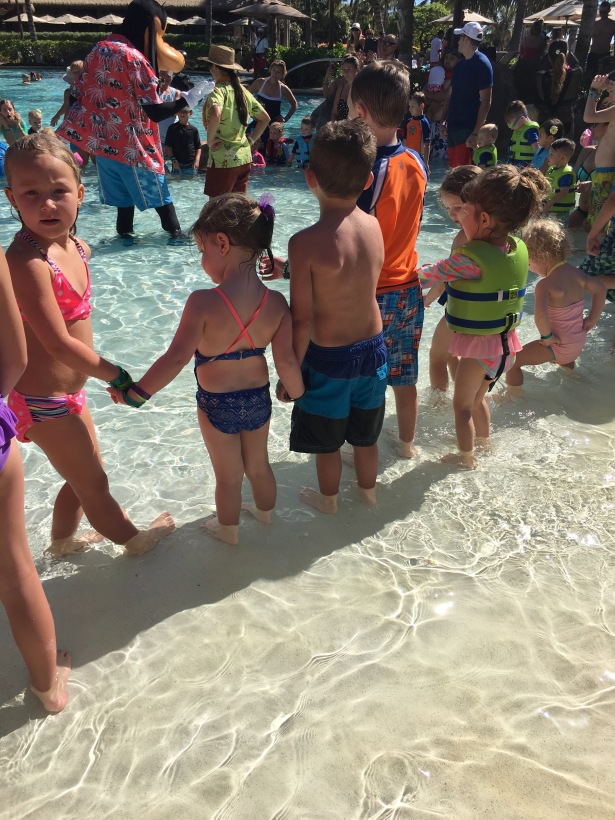 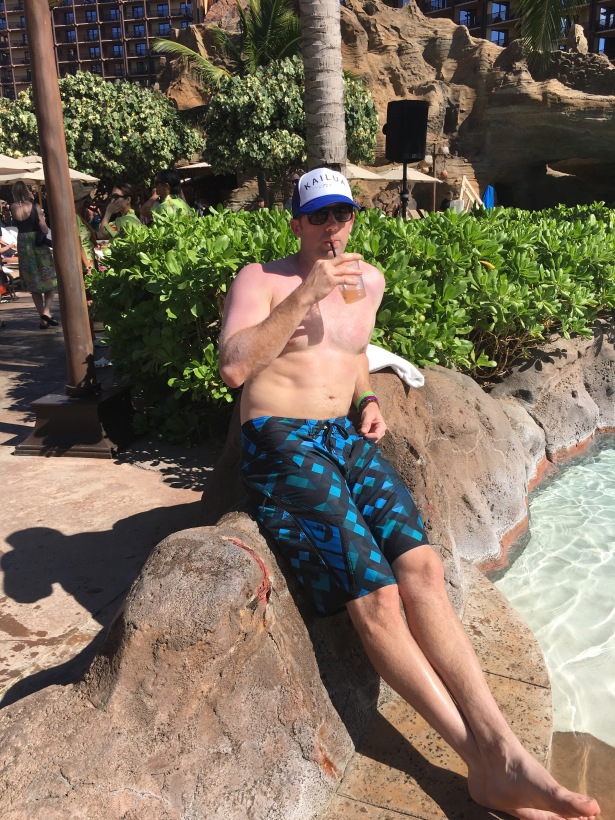 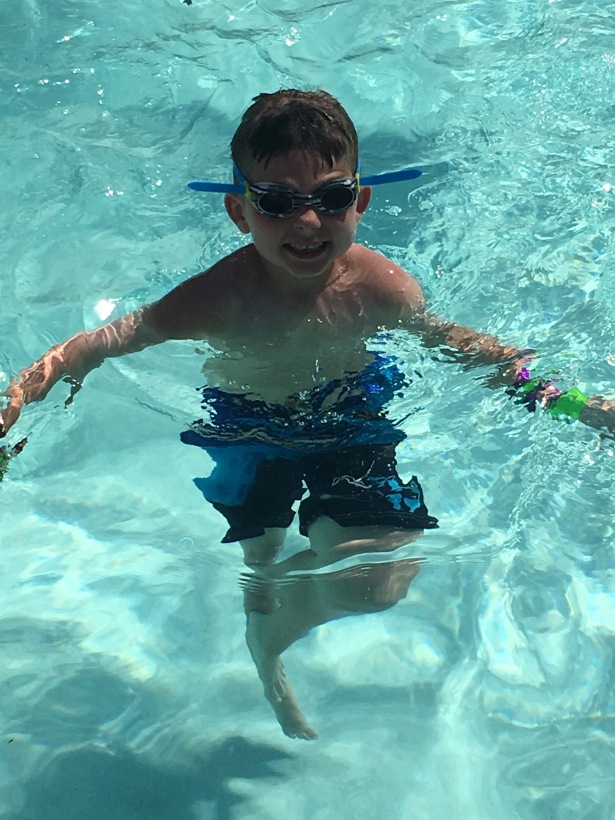 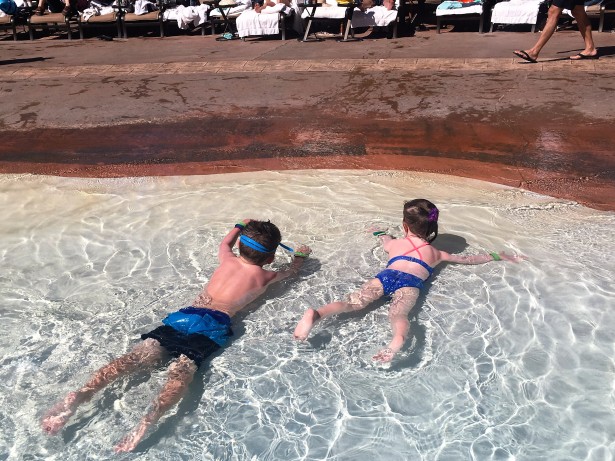 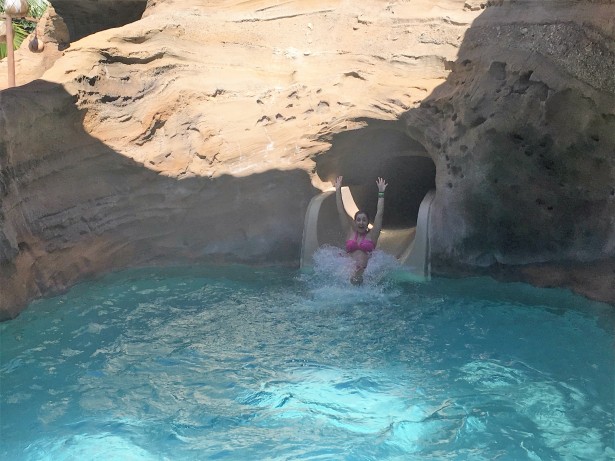 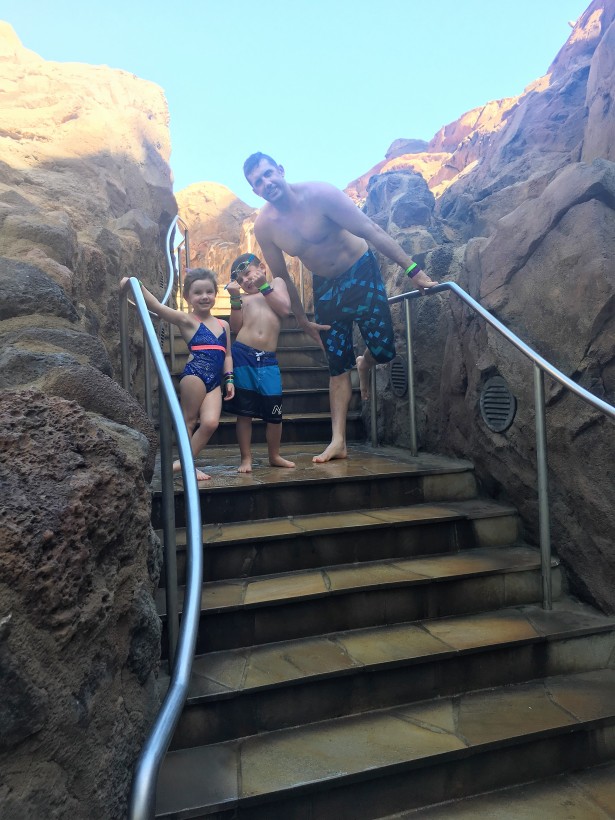 That night we went back across the street for dinner at the Mexican restaurant, unfortunately it wasn’t very memorable, but when you are from Southern California and you’ve had the good stuff it’s hard to accept mediocre food.

After dinner, we enjoyed a movie on the lawn at Aulani.  We watched The Good Dinosaur, which we had seen before, and since it was so late Allyson fell asleep on the blanket under the stars, and we had to carry both kids back to the room after the show.

Sadly we were on our final full day at Aulani (and on Vacation.)  We walked back across the street to enjoy  Breakfast at the ABC store, drop the kids off at Aunty’s, worked out at the gym, and got ready for another pool day.  We made sure to participate in all of the pool activities that day.  Additionally, we played the hotel scavenger hunt using ipads that we borrowed from the resort.  It was a fun activity for us to do as a family.  We also picked up some flowers and string to make our own lei’s before we had to return to the mainland. 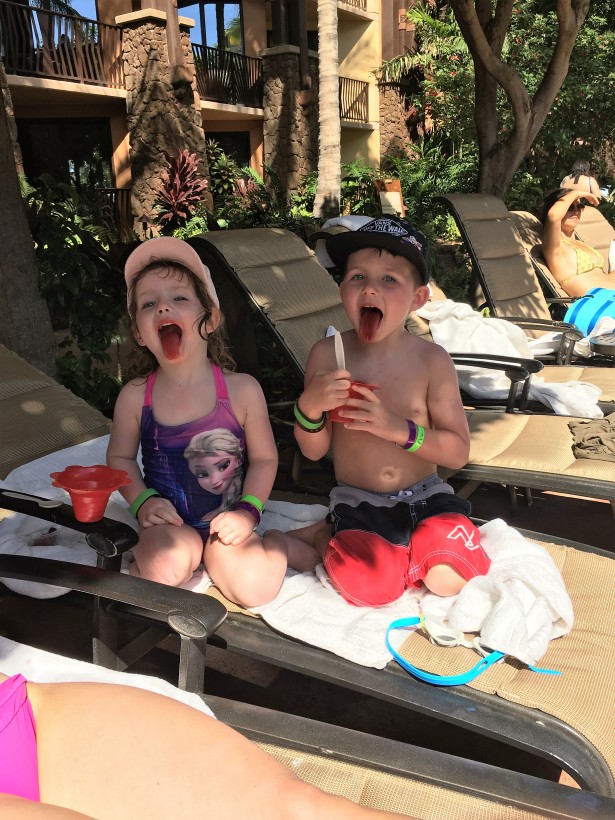 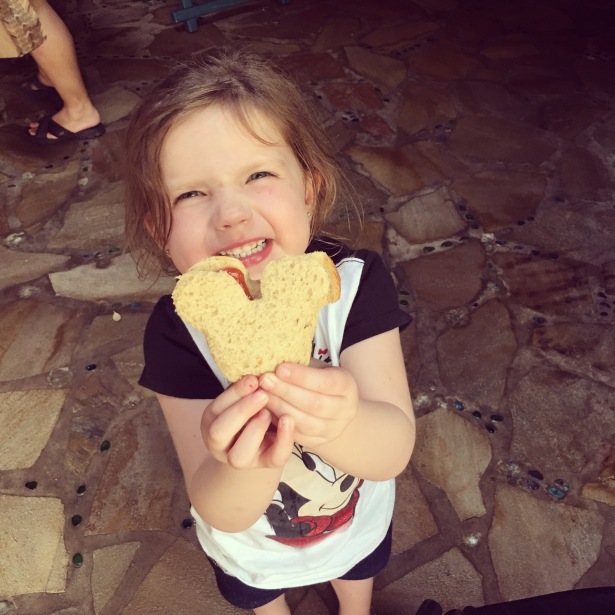 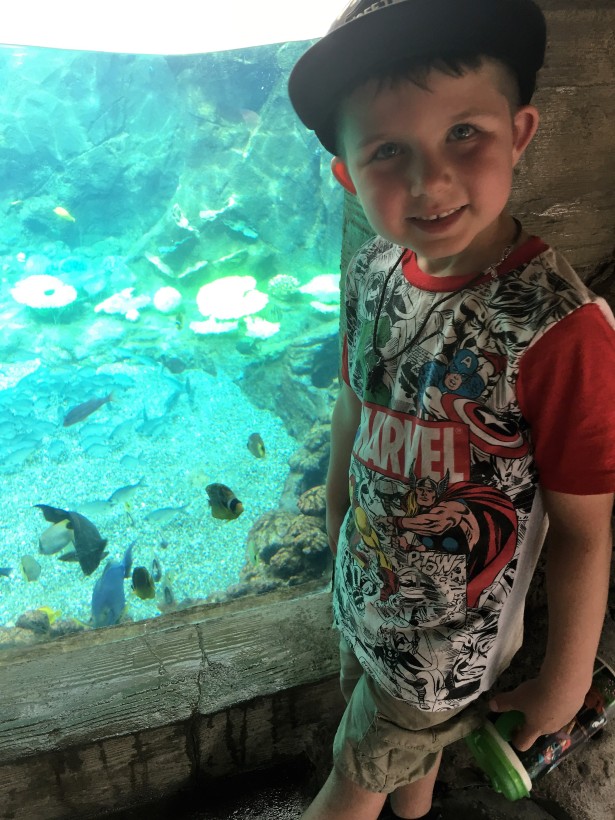 That night, the kids went to Aunty’s Beach house one last time, where they ate dinner, learned the hula, and participated in a comedy night.  Meanwhile, Matt and I enjoyed one last date night on the island.  We walked next door, to the four seasons, to admire the beautiful sunset.  Then we had our last dinner on the island at the upscale Ama’ Ama’ at Aulani.  This was our favorite meal at the resort, and we would highly recommend.  At one point Aunty’s called me to say Allyson missed me so I went next door to see if she could stay a little longer and she agreed since she was just curled up on a comfy chair watching Frozen (tough life, hehe)!  After dinner, we picked up the kids and went back to the room. 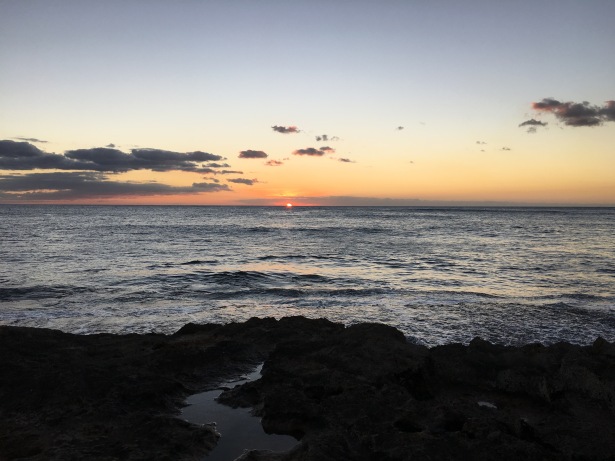 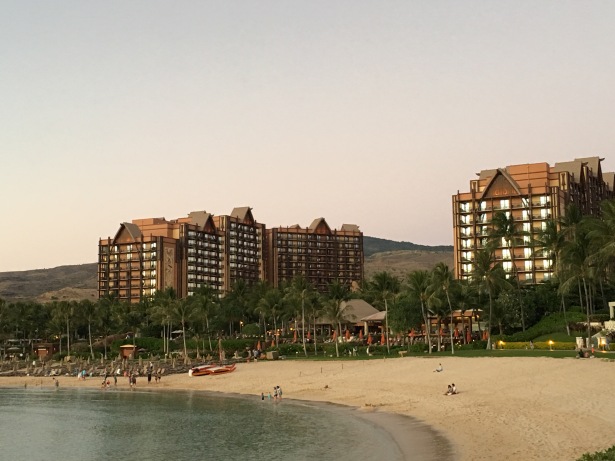 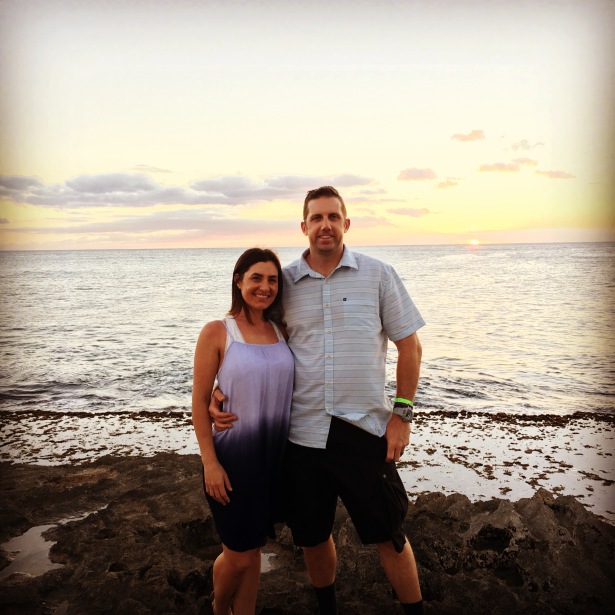 The next day we woke up, had breakfast at the resort and headed home.  We had the most amazing vacation all around.  And because of this trip, I am far more open-minded to traveling with little ones.  We did have a lot of help between Maggie and Aunty’s Beach House helping with watching the kids.  However, there are a lot of places out there with kid activities, and the older my kids get; I won’t have to depend on those types of resorts.  Thanks for reading my post about our Hawaii trip!  xoxo